The fair was organized by the study group family research Osnabrück e.V.. The patron was the Ministerpräsident of Lower Saxony, Christian Wulff. Unfortunately, he couldn’t attend the fair personally.

Friday evening, my two youngest daughters and I drove to Anke who is living on her sister’s farm. Saturday began early. Because of the unusual sounds of a farm, my kids woke at 6:00 am. First I was annoyed but it gave us enough time to double check everything we loaded into the car. Anke had prepared everything so thoroughly that we actually did not forget a single thing! I am still astonished. Usually on an occasion like this I am plagued by bugs.

At 8:00 am we drove to the Solarlux-Forum (s. picture). It is situated directly at the Motorway (A30) right outside Bissendorf near Osnabrück. Its owner is a producer of greenhouses and winter gardens. A large number of them was displayed on the 2000sqm of the hall.

The hall was mainly built of glass and it promised to become a sunny day. We thought that we might get a sunburn or heat-stroke but we were lucky. Around 11:00 am the sun had reached a point were we were able to enjoy the shade of the adjoining buildings. Other exhibitors weren’t so lucky. Some had to wait till late afternoon until they got a little shade, too.

during setup – after setup 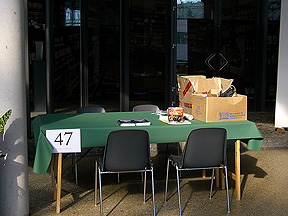 It took us nearly an hour to decorate our table (s. pictures). We were especially proud of our panel. Anke had got color-copies of the most important documents. She also risked the use of the expensive original photo of the map from DuPlatt. Many people were drawn by the map and thus started to talk with us. It wasn’t difficult to turn their interest to our novel and a lot of them finally bought a copy or two. 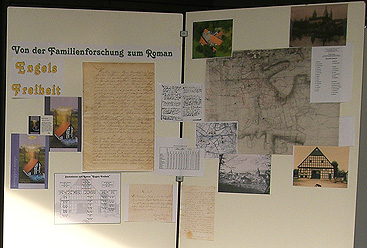 It wasn’t as crowded as in Leipzig. That is, there wasn’t a torrent of people pushing past the 49 exhibitors through the hall but I estimated the number of visitors at a couple of hundred. Most tables were busy. Our table too was of interest to many people, among others the mayor of Bissendorf and several people from the press.

All in all, it was a wonderful but exhausting day. I think we will be there again, next time; maybe with a first extract from “The Waldmanns: Victor’s Rage”