Between the 12th and 19th of July, many German regions experienced heavy flooding. In many places, it rained more than 150ml per square meter in only 24 hours. Hundreds died (firemen, men, women, and children), many more lost their homes, their possessions, their livelihood. The country was in shock even as help began to get organized.

Just a few days later, I was contacted by a fellow writer I knew from Facebook. She needed a publisher for a charity anthology she was planning, and since I own my own, tiny publishing company, I agreed. Then, the stories began t pour in and they varied so much in genre and target audience, that we decided to split them into 5! themed anthologies.

Since my grandson also is at home right now, kindergarten holidays, I’ve been to busy to breathe. BUT I managed to prepare one more publication for you. The German version of this book has been out for a while. I had this scheduled for much earlier, but never got around to creating the necessary files.

So without further ado, here’s my newest release: The Witches of Greenwitch (it’s on Amazon first, the other retailers will follow asap). And this time you have the choice between eBook, paperback AND hardcover (although the print versions will take a little longer to trickle through the system). Here’s what the story is about: 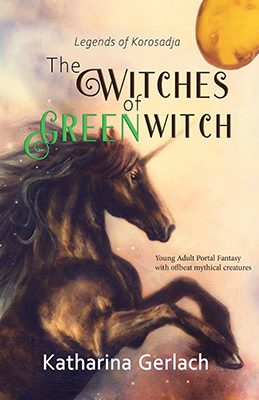 Can a book-rat haunted by memories escape a determined hunter and save the world she only recently discovered?

Orphaned by an accident, Melissa lives with her aunt and uncle, and reluctantly accompanies them to a holiday at the Baltic Sea. Luckily she brought along a book in which to immerse herself instead. But when she discovers a magical stone, it transports her to Greenwitch, a world that could have been the setting for one of her fantasy novels.

As she searches for a way back, she must cope with giant spiders, stuck-up unicorns, and other legendary creatures. Meanwhile a skilled hunter is tracking her with a handful of trained fighters, and he will stop at nothing to get her magical stone.

Melissa must learn to control the stone’s power to re-balance Greenwitch, or her pursuer and his allies will invade the worlds like locusts and eliminate all magic. Is Melissa strong enough to stop them?

If you like magic, unicorns, and dragons, enjoy Melissa’s adventures. But if you suffer from arachnophobia, don’t touch this book!