Pst, it’s me again. You can now get my fairy tale retellings in four bundles with really cool covers. Each omnibus got a brand new, never before published bonus story. If you haven’t read the tales yet, go and get them: 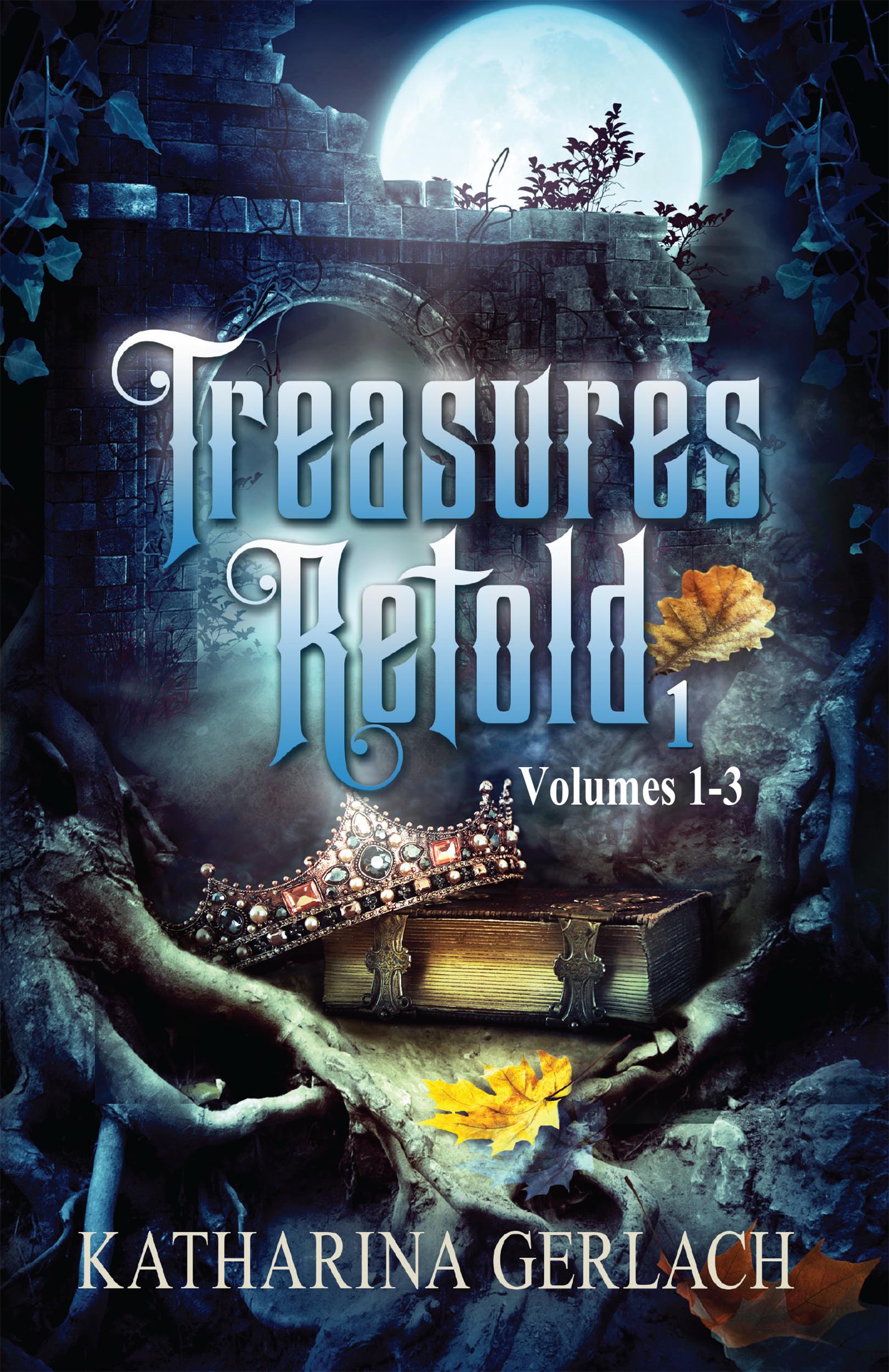 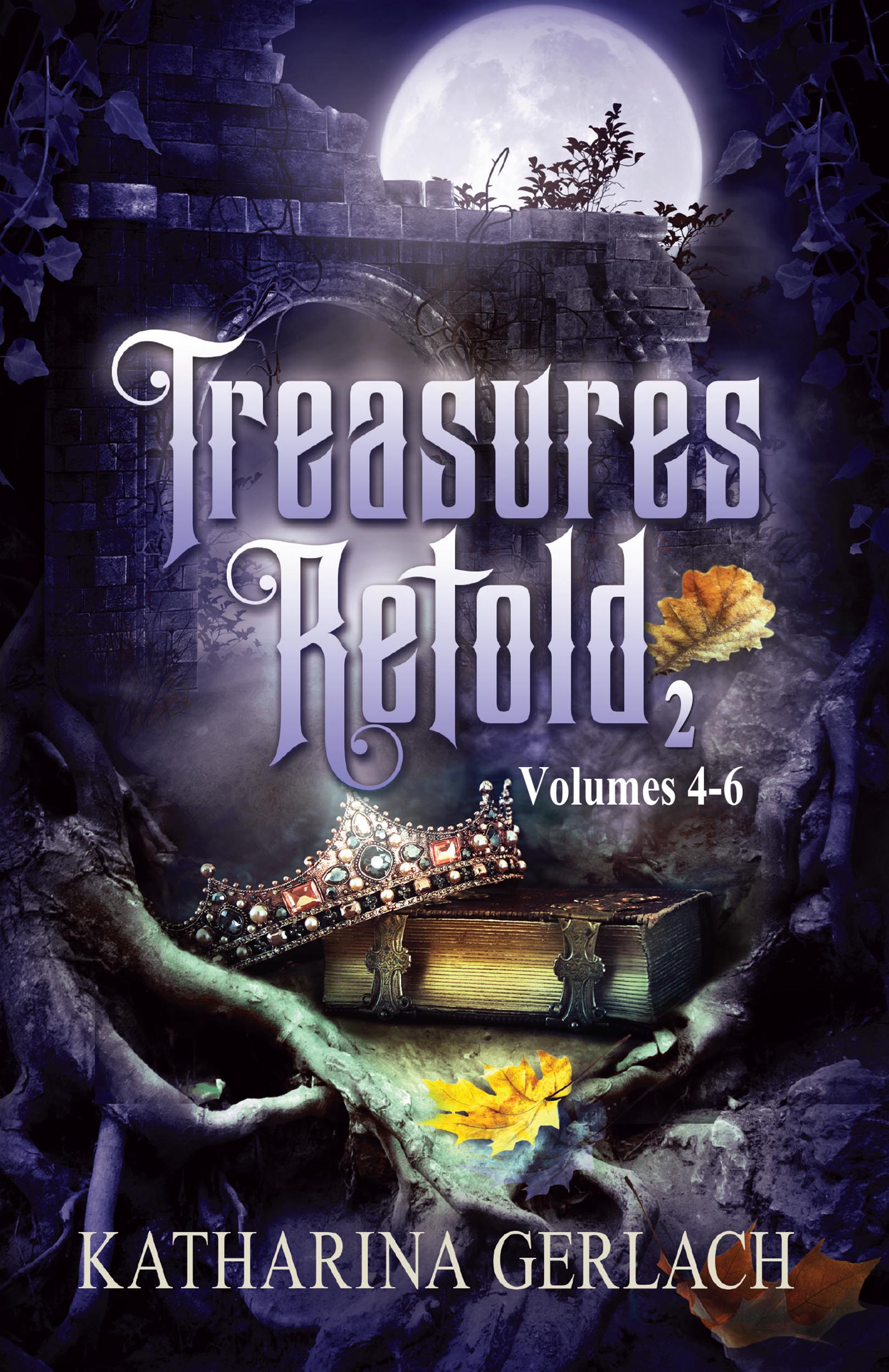 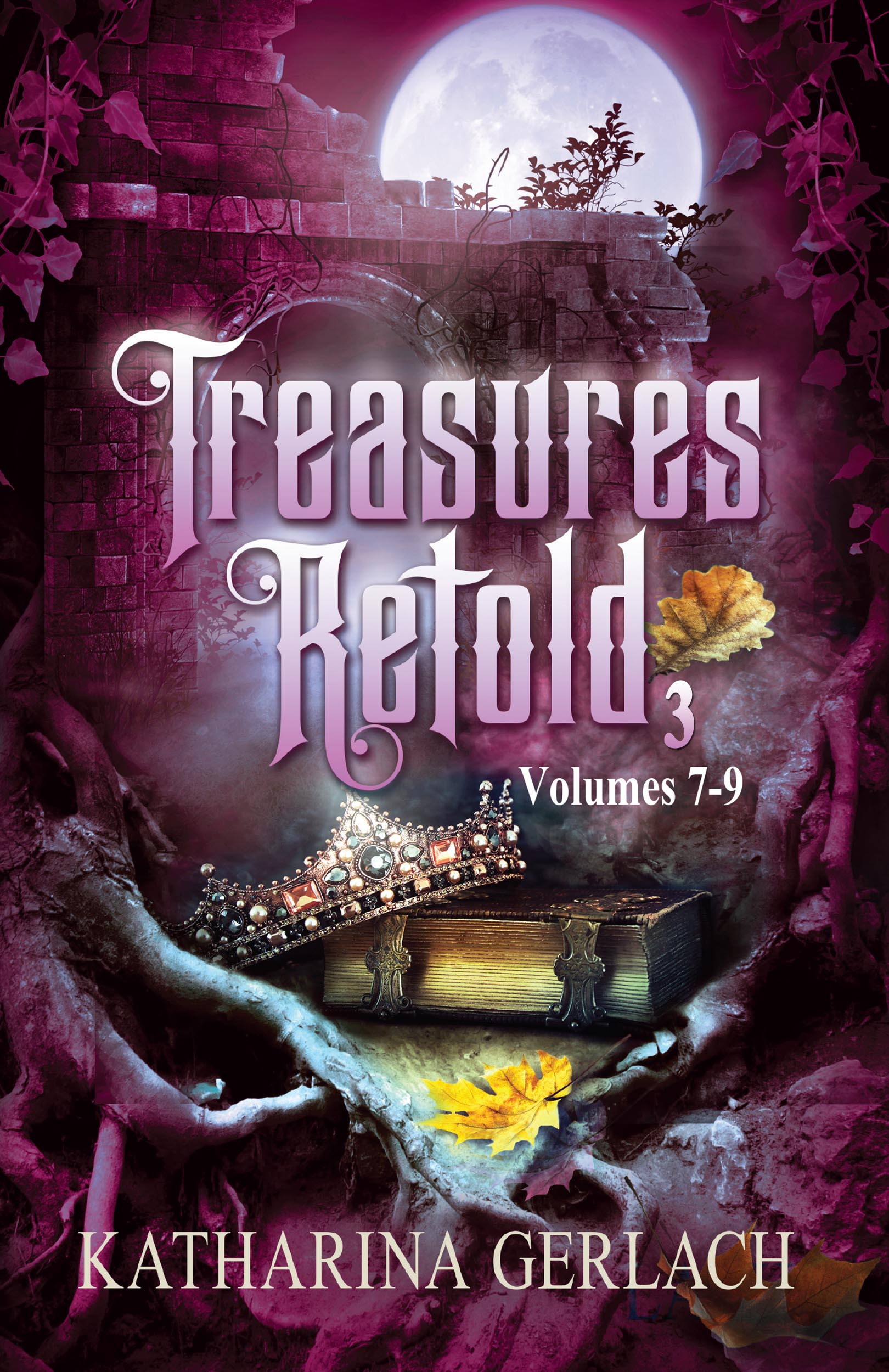 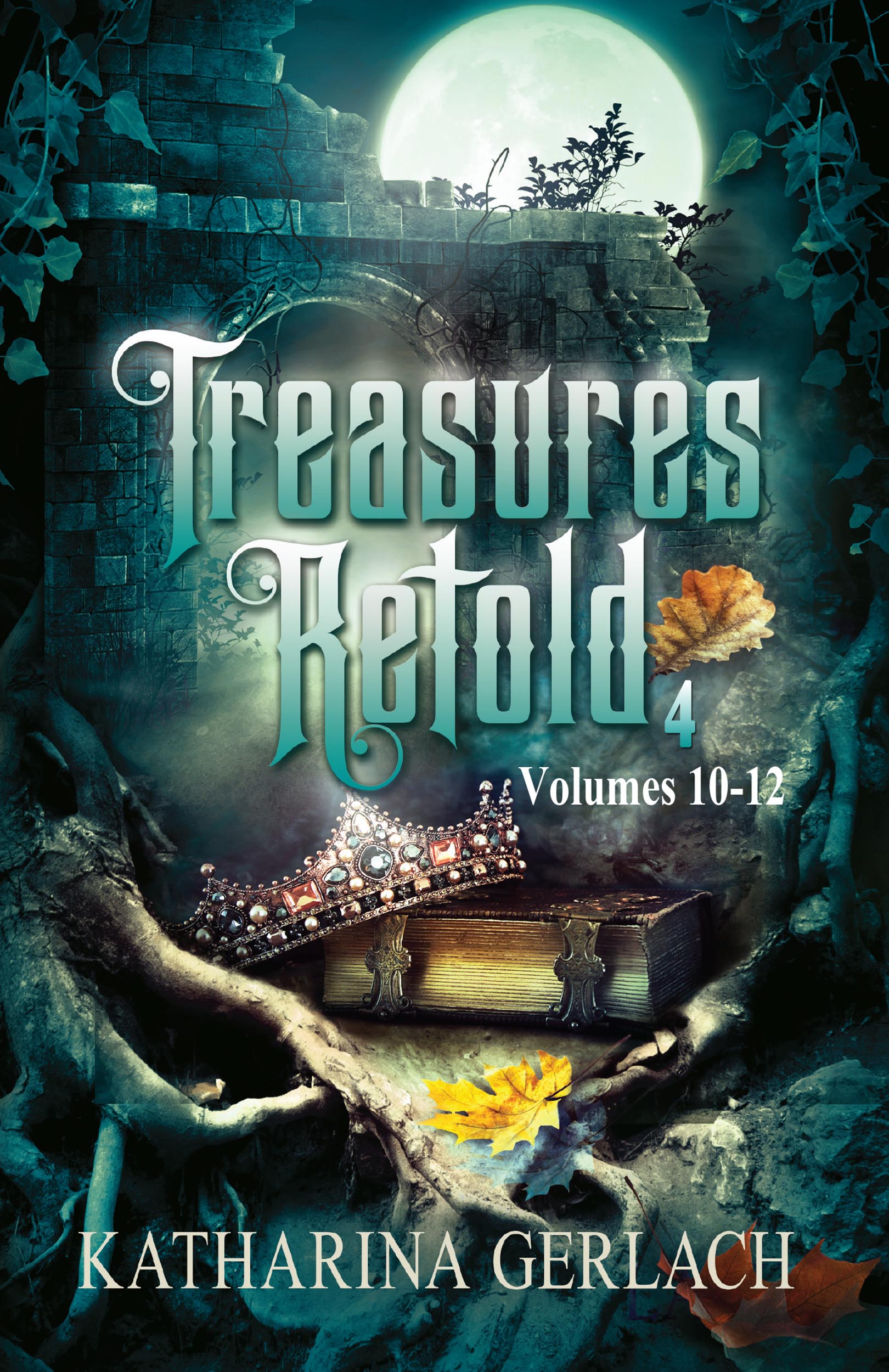 Today, you’ll get a free short story from me. I was asked to include: Valentine or Love or Anti-Love, Cat, Grimoire and Fire. I hope you’ll like what I came up with. Again there’s a list of more participants of this BlogHop after my story. Enjoy and leave a comment!

Going to the Witch Hunt Remembrance Fire with Gregory had been Jackie’s desire since she’d been allowed to go the first time at age thirteen. Two years later, her biggest dream was about to come true.

Fighting her elation, she’d put on her best black dress—the one that looked least sun-bleached—and even found a purple scarf with matching stockings that would go with it. Unfortunately there wasn’t much she could do about her squished witch’s hat or her sturdy boots. With the family finances like they were, she had to wear what they could afford.

How had Gregory noticed her? Normally, he only hung out with the in-crowd. It didn’t matter. He was going to take her along as his partner, not any of the other girls.

Wrapped in a wide, black cloak she’d inherited from her gran—one of the last True Witches—Jackie waited for her beau. Her heart beat frantically when the limousine stopped in front of her house.

But no one opened the door for her, and when she climbed inside on her own, the long interior room with the dark blue velvet seats was empty. Even the tinted glass between her and the driver was closed. She’d never felt this lonely. The disappointment gnawed at her heart.

Just as she was about to step back out, the limousine drove off. The door closed with a thud, and Jackie fell into one of the soft velvet seats.

The sound came from one of the hidden compartments near the front of the long room, and the order was indisputable. Wrapped as tightly into her cape as possible, Jackie opened the small door, ready for a furred fury to attack anyone in sight. She’d never been particularly good with familiars.

But the cat—a black tom with white front paws—just walked out, tail held high and meowed again as if to say, “What took you so long?” It turned and stared at Jackie.

A few heartbeats later, the limousine stopped and the door was ripped open.

“There’s tonight’s princess!” Gregory’s voice was like honey and made her knees wobble.

The tom mewed in disdain, scratching the extended hand before Jackie could grab it.

“Yikes, why did you bring that monster?” Gregory sucked at his fingers while Jackie climbed out of the limousine.

“He isn’t mine. He was locked in a compartment.” Why did she have the feeling she had to defend herself?

Gregory grunted and took her upper arm. None too gently, he pulled her on the path uphill, toward the bonfire. As tradition demanded, it burnt in a ring of stones on top of an airy hill next to a spring. All four elements combined were the token that the witch hunts would never return. By the elements, the last few True Witches had made peace with the None Talented a century or so ago.

Jackie was looking forward to dancing around the fire. When the flames died down, those whose powers had already manifested would jump through the flames, the others would wait to jump the glowing embers.

Jackie loved the flames. In her family most members were fire witches. She breathed in the aromatic scent of smoking wood. It seemed to be calling for her, but no. It was just the dratted cat, hissing at Gregory.

Only when they neared the groups of teens dancing around the flames did she notice that no adults were around.

Where were the supervisors? She would never have gotten permission to come if the school hadn’t promised to bring in supervisors. And Gregory’s grip on her arm was beginning to hurt. Just as she was about to turn to head home—even with Gregory by her side she wasn’t ready to face the school bullies without adults nearby—two heavily built young men approached. Thank the Mother, Gregory has brought his bodyguards to protect me. Jackie relaxed as they stepped beside her.

“You’re sure about this?” Gregory asked someone behind Jackie.

“Witches take up to fifteen minutes to catch fire.” It was Dina’s voice, and it seemed to douse Jackie in ice water.

Gregory nodded to his bodyguards. Four strong hands grabbed Jackie’s arms. And before she could so much as protest, she flew into the heart of the fire.

The heat and the smoke from the burning timbers stung on her skin and made breathing hard. She teared up. Tendrils of fire seemed to wrap around her arms and legs, prolonging the flight. Hot air whipped up her hair and made it dance.

Meow! The tom jumped after her, and they hit the white hot coals throwing up a shower of sparks. Jackie fell forward and her hand landed on a searingly hot pebble. Still her fingers closed around it instinctively. To examine it, she blinked away her tears. They dropped onto the hot stone with tiny hisses, their vapor licked up by flames and carried away by the hot air.

Then the pebble changed. It expanded, grew rectangular and flat and softened to the touch. The corners turned to gilded metal. A grimoire? Only the rare True Witches owned one.

Jackie was so excited, she didn’t notice the fire’s discomfort any longer.

“I knew it,” the tom said. “From the moment I set my eyes on you, I knew you’re a True Witch. One of the few that can balance all four elements.”

“You can talk?” All of a sudden, Gregory, Dina, and all the others were farther away than the moon.

“How else do you expect me to teach you?” The tom sat down and began to lick his up-stretched hind leg. “Aren’t you going to punish them?”

“Now, that sounds like a really good idea.” Jackie grinned and pulled the fire to her. Flicker by glow by flame, it came to her, climbed her legs, spread over her body, her face, her hair, and her arms. Like a living torch, she stepped off the bonfire.

Gregory turned paler than the white sand of the sea, and if not for his bodyguards, he would have dropped where he stood. They carried him downhill as fast as they could. Following them, Dina screamed like a banshee as she ran. Most of the other kids fled too. Only a few reached for blankets and the fire extinguisher valiantly.

Before they could do anything, Jackie sent the flames back to the bonfire.

“All the better for us,” she said to the stunned helpers and pointed to the long table covered with delicacies. “Let’s party!”

The tom stalked off the bonfire and sat beside her. “I’m quite proud you didn’t hurt anyone.”

“They’ll be running home to mommy and daddy, wailing about murdering me.” Jackie spoke with a new spark in her voice. “Let them get themselves into trouble for a while.”

“I knew, you’d be the right kind of witch for me.” The tom lolled his tongue and it looked just like he was laughing.

III – The Empress by Raven O’Fiernan

Careful What You Wish For by Nic Steven

Jesse and Tyler by Bill Bush

Patent of Marriage by Grace Craddock

Stop Dragon My Heart Around by Elizabeth McCleary

Any Other Way by Barbara Lund