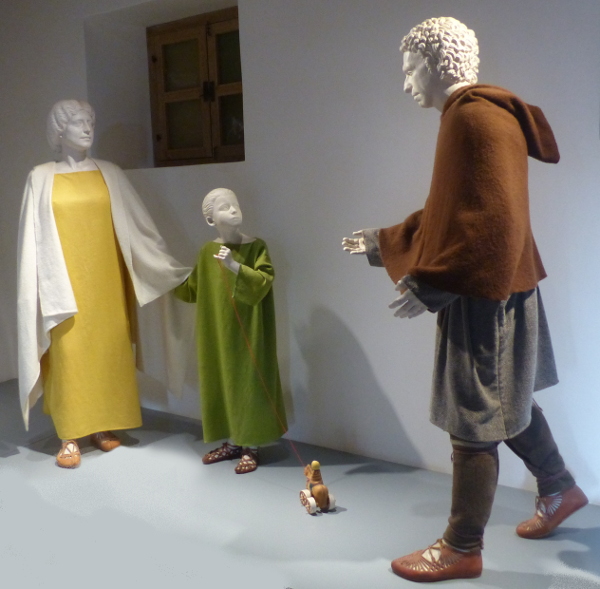 At home the Romans dressed casually but, since Germany was a comparatively cold country, with warm dresses. The Roman men adapted with time and often wore the long under-trousers that German men wore. The toys of the children were often similar to those still used today (waddling animals like ducks, spinning tops, marbles, etc.). Shoes were made of leather and protected the feet from the cold and the sharpest shards. Still, you felt every stone through the thin sole (I know because I bought a pair for myself. They’re very comfortable but much like walking barefoot).

As far as I could tell, Romans loved bright colors. The fabrics in the rooms we saw were mostly yellows, greens, reds, and the natural shades of wool. Strangely enough I didn’t see any floor coverings or wall hangings (like carpets or tapestries). I’m not sue if they didn’t exist or if the reconstructing people just didn’t think them important. To me, the rooms looked rather spartan (in the modern sense of the word since Romans most likely didn’t copy Spartan living styles 😀 ) 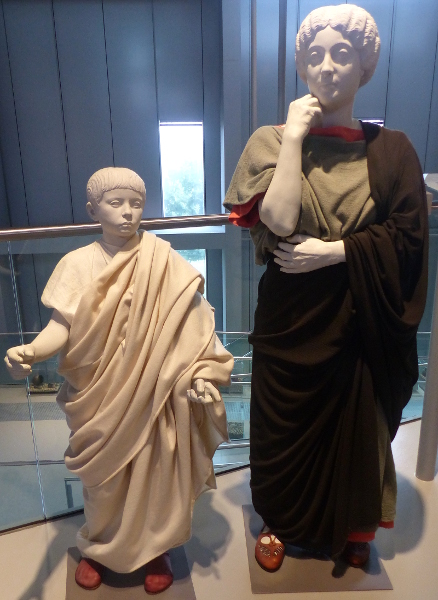 When the Romans left the house, they had a strict dress code. The amount and quality of the fabric a person wore depended on the family’s financial situation. The more and the better, the higher your status. Togas were used for keeping warm during winter but also for showing respect. For example: women who didn’t cover their feet with the toga they were wearing weren’t respectable. In Roman times, only whores and the very poor would show their feet. A man could even divorce his wife if she was seen withe more than the tips of her toes showing beneath her toga. So the picture on the right is wrong in that regard (I’ll tell you in a later post how I learned these details). 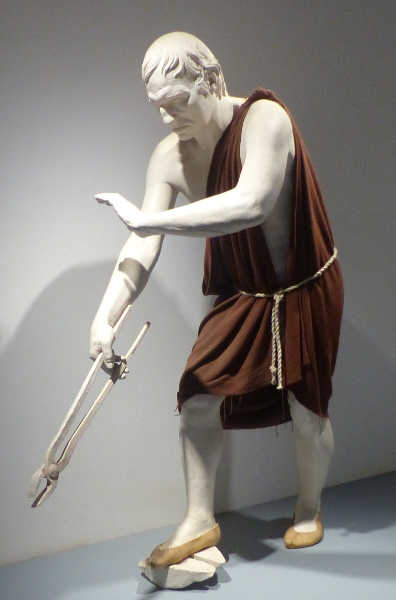 As you can see in the picture on the left, security measures during work weren’t yet invented. Like this smith, the Romans wore comfortable clothes for even the most dangerous work. I bet there were a lot of work related accidents.

Germans wore far warmer clothing. Since they didn’t have amenities like heated floors, they wore long skirts and heavy trousers even inside their houses. Outside they usually had several layers to keep off the cold and the rain. I guess in summer they wore pretty much the same indoors as out. But our guide didn’t say anything about that, so that’s guesswork on my side.

I believe that most Romans in Xanthen bought their fabric from Germans except for the richest who surely imported theirs directly from Rome. But not everybody had the means to do that. Our guide confirmed active trading.