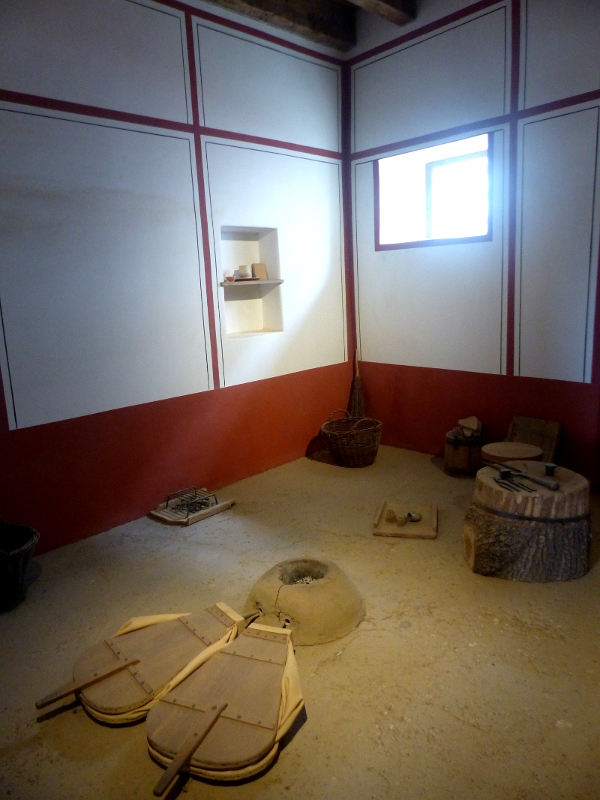 One of the shops we visited was a smithy. I was surprised by the tiny size of the fireplace (that’s the little gridiron in the middle of the red painted wall). I think in winter, it must have been quite cold for those people who didn’t have floor heating. After all, Germany was colder, wetter, and all in all less comfortable that Italy. I’m sure many of the inhabitants wished they’d stayed in Rome.

The smithy worked with silver if I remember correctly. For an iron forge, the furnace is too small. Not too far from the recreated houses were the remains of a iron forge, and it had three furnaces and ground heating. However, it hadn’t been reconstructed, so one had to use one’s imagination.

Everyone who owned a little shop worked and sold their wares from home (on the other side of the bellows, outside the picture, is the room-wide wooden counter for selling wares; the whole front of the room could be opened to the street). There was no separation between small and medium sized businesses and the owner’s living quarters. They were mostly in the same house. Only big industries (like the dockyards, farming, or stone masonry) had their work-spaces outside the city. 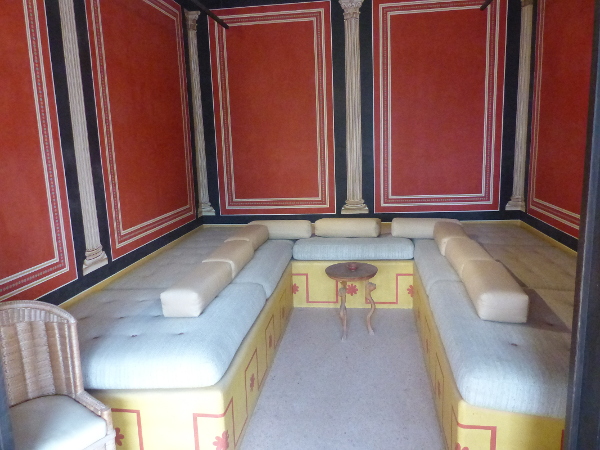 Romans loved luxury, and those who could afford it, wanted to celebrate like in Rome. So there were restaurants with bed-sofas. Each of the little rooms (see picture) could hold nine men (no women allowed there unless they were whores). It surprised me to learn that Romans didn’t always lie down for eating. That was only done for feasting. At home, they had wooden tables with chairs or stools. The children often stood while eating. 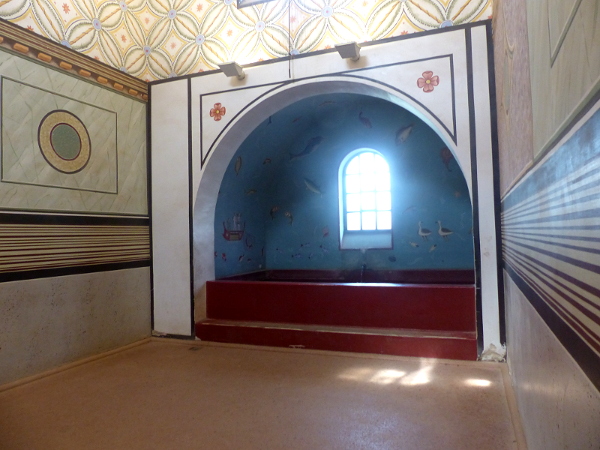 Romans also insisted on cleanliness. Bath houses were spread throughout the city so every citizen had access. There was a really big one for the higher classes near the town center, but the park’s owners had built the museum on top of it. Still, there were enough foundations to understand the basic layout. Also, they had reconstructed on of the bath houses.

The genders bathed in different facilities. The first room a customer entered was a cold room for undressing. The next one was already quite warm and had basins with warm and cold water. It as often used for shaving and washing before one went on to the last room. Upon one’s return it also served for cooling down slowly. It was heated extremely well and the water was as warm as it is in one of today’s bathtubs. The main point of this room was relaxation (and surely talking business as well). The big bathhouse had some smaller rooms at the side for massages or whoring or simply for resting, but the reconstructed bathhouse didn’t have those.

I was most delighted by the colorful designs of the houses. The archeologists used historical finds from other areas to recreate the rooms, and they were much more colorful than what I’d anticipated.