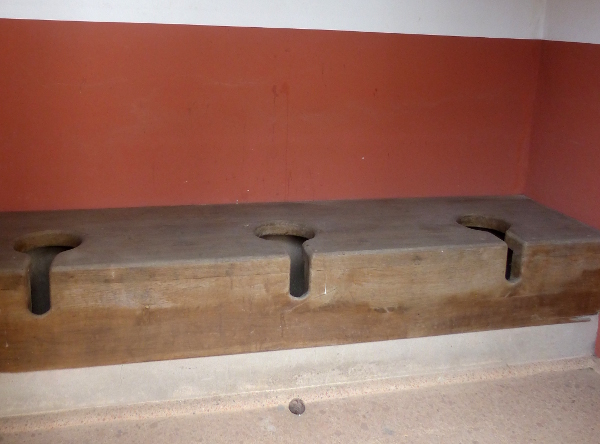 Eventually we came to the reconstructed houses and the part that interested my husband a lot: the toilets (after all, he’s head of a waste water disposal facility). As we already knew from books, the Romans used toilets with more than one seat and no separations between (see photo). They often met in toilets to talk business. Below the wooden (or sometimes stone) seats, there was running water that took the feces away. The Romans used sticks with a cloth wrapped end that they dipped into the water to clean their private parts.

No one was offended by using a toilet with other people. There were toilets for men and for women but also toilets where men and women went together. As our guide said, toilets were a favorite place for whores to hang around.

Interesting enough, the proverb ‘money does not stink’ (pecunia non olet) does not come from a tax on multi-people toilets as I’d thought. It is ascribed to the Roman emperor Vespasian who put a tax on the distribution of urine from public urinals (the Roman lower classes urinated into amphorae which were emptied into cesspools). The urine collected from public urinals was sold as an ingredient for tanning, for laundry, and for cleaning and whitening woolen togas. 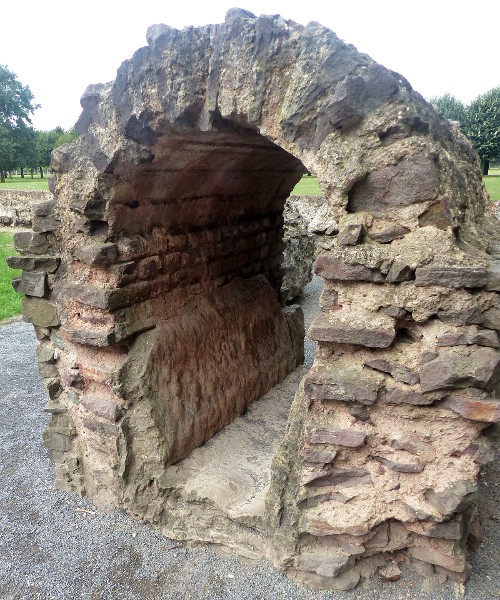 The Romans also knew that waste water for more than a handful of people needed to be taken care of (after all there were ca. 5,000 people living in that town). Therefore, they build a deep, covered canal (the Cloaca Maxima, see photo) with sidearms to every block of houses. Smaller canals came from the individual houses to these sidearms. The water that ran constantly through the toilets flushed the Cloaca Maxima and the feces ended up in the Rhine that took them away.

In some places there were access hatches indicating that there were people who took care that the Cloaca Maxima didn’t get clogged. Imagine the stink in the tight place there (the height of the Cloaca Maxima in Xanthen was barely 1.5 m), and you know how miserable a person had to be (or how high the pay) to take that job. 😀

Clean drinking water did not come from the Rhine (and for very good reasons, imho) but from a spring in the nearby mountains. An aqueduct brought it directly into the city where it was distributed to the houses, to the bath houses, and especially to the toilets. However, for washing and other water-consuming tasks, Romans often used rainwater collected in cisterns. In other towns there were also water supply wells but not here.