About ten years ago, archeologists discovered a Roman-Germanic battle field not 20min car drive away from where I live. They kept it quiet for a long time to keep pot hunters away. Eventually they had to talk about it though because it was a sensation.

Up to the discovery of said battle filed, scientists had thought that no big Roman army ever ventured far into Germany after the disaster of Varus’ lost battle (9 aC). However, coins found in this dig dated the site to 235/236 aC. It was later discovered that a translator of an ancient Latin text had thought the claim that Maximinus Thrax took his army all the way to the Elbe as an exaggeration and adjusted the given mileage downward by a generous margin (several hundred miles less).

My husband and I became interested from the very beginning and visited many presentations, the only exhibition of the original finds so far, and (naturally) several guided tours over the Harzhorn (always worth it if you’re near). So when we were faced with the “hard” decision what too look at during our first kid-free holiday in years, “Roman culture in Germany” was a no-brainer.

By the way, you can click on the photos for full size. 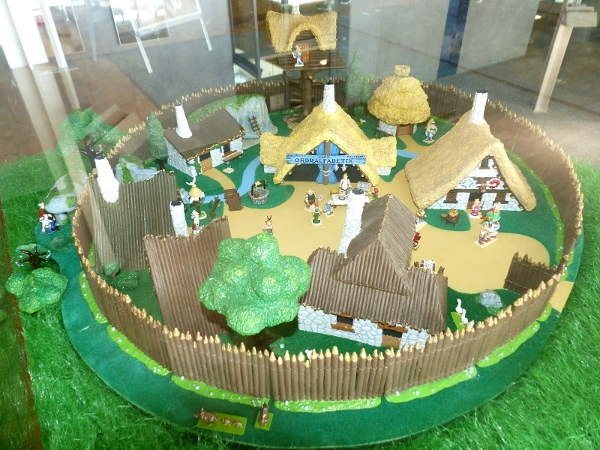 We started in Haltern am See (Haltern at the lake) with the Roman museum there. It wasn’t a very big museum, but the folks running it had given a lot of thought to it. Most of the exhibits were thoughtful and interesting for all ages. There were lots of fun things to see or do for children (like the village of Asterix & Obelix), but also plenty of interesting displays for teens and adults (diorama or a full sized pottery kiln; see below).

Haltern was an important military fort, called a Kastell in German, where boats brought supplies up the Lippe river. Therefore the Roman army had fortified the place. But they were also open for trading with the locals (mainly blond hair, pelts, carvings and fresh vegetables and fruit).

The length of the army of Varus’ legions in Playmobil was impressive. There were ten donkeys carrying the tents for each Centurie. The row of little figures went all the way through the room and back and then another bit diagonally. People at the front of the train probably never realized what happened a mile behind them. That surely was part of there reason Arminius won that battle. A really interesting museum that my husband and I have visited several times already is in Kalkriese near Osnabrück, Northern Germany. Scientist are fairly certain that they’ve discovered the battle field of the so called Battle of Varus there, and the museum is quite interactive.

The tents housed six Roman soldiers when the army was on tour. When they stayed at a Kastell, they shared a barely bigger room in a barrack (we saw that the next day in Xanthen). Every day they had to set up a camp surrounded by a rampart and ditch and a wooden palisade, dig latrines, put up their tent and cook their own food. In the mornings they had to take everything apart again and fill in ditch and latrine.

Each soldier carried 14kg (that’s nearly 30lbp) luggage plus just as much for protection (helmet, chain mail and so on). These guys must have had bigger muscles than the average body builder, and they were probably a lot faster and more agile too. My husband surely is no weakling, but he was glad when he could put the carrier down again (btw, did you notice the difference in luggage back then [carrier] and today [trouser pants]? :D).

I was most impressed by the tiny glass fragments. I had known that Romans already knew how to produce glass (I mean that alone is incredible. After all, it was still only the Early Iron Age). However, I wasn’t aware how colorful their glasses could be. From the bits that I’d seen so far, I’d concluded (prematurely) that their glasses were dull-ish and normally colorless or grey or brown-ish. That isn’t true. Just marvel at the brightness of the shards… Romans seemed to like bright colors (we saw more proof for that later).

But the highlight of the museum stood on a separate field just a few minutes away by foot. They had reconstructed the wall of the military fort the Romans used to have there. Well, that was impressive. Although it was only a small part of the wood-earth-wall that used to surround the whole fort, it made me feel insignificant and small. To imagine being a historical German farmer, used to living in a small village of 3-6 houses and low fences (e.g. to keep animals out of gardens) who took provisions to the Roman army the first time, spawned a whole string of new stories. The fort must have been awe inspiring for the locals (although they’d probably rather died that admitted it).

2 thoughts on “Romans in Germany 1”