After debating with myself for quite a while, I decided to join a promotion of several fantasy, SciFi, and horror authors. For the next three days, we bring to you a plethora of free novels. 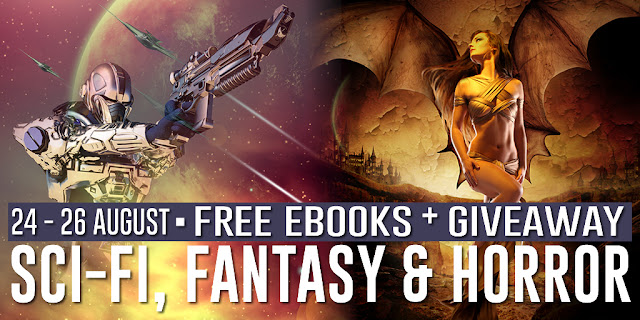 I revamped the cover of my novel “Juma’s Rain” (it seems the US audience didn’t much like the mostly bare bottom of the main character despite the fact the story is set in Stone Age Africa) and decided it’s time for some visibility. It is now free for anyone who likes Romantasy (Fantasy and Romance).

Here’s the blurb and the cover again, just in case you haven’t seen it yet. Grab it for free while you can. 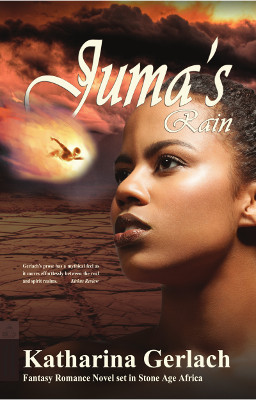 The sun’s rays parch Juma as she leads her all male family toward the main village. Nothing and no one will stop her from becoming the chieftess’ apprentice. So she ignores the heat. Everything will be better near the lake. But the fields that should sprout green by now lie bare, with precious soil cracked and dry. Even the lake, thought to be everlasting, dwindles.

Juma discovers that heat dæmon Mubuntu is out of control and that the rain goddess is still sleeping. But only Netinu, the chieftess’ son, believes her, and he seems more interested in courting her than in the welfare of the tribe.

With her dreams going up in flames, Juma prepares to battle the dæmon and wake the goddess – and maybe, in the process, prove herself worthy of becoming chieftess.

A few words from me about the idea for the novel

The main character was named after my World Vision Goddaughter from Kenya. However, I made sure their characters differed greatly. After all this is a made-up Fantasy story. It is loosely based on Theodor Storm’s novella “Die Regentrude” (Germany 1863) but is set in Africa in a tribe of the little known Nok. All we know about this culture is that they left very beautiful clay statues and kilns behind. As far as we know, they went directly from using stone to iron tools without first using copper and brass like the rest of the word. What little I was able to find out about the Nok, I found so fascinating that I wanted to make them come alive again. And what better way to do that than with a love story.