When I learned to read, I inhaled fairy tales. The first book I ever wrote (now sleeping peacefully in a drawer) was a fairy tale kind of story. Many of my early attempts, handed in to editors with a hopeful heart, reminded of fairy tales. And then… nothing for many, many years. I wrote Fantasy, SciFi, Urban Fantasy, Historical novels and even Non-Fiction, but never a fairy tale any more. I guess it was because of all the rejections I got and that basically said, fairy tales don’t sell. 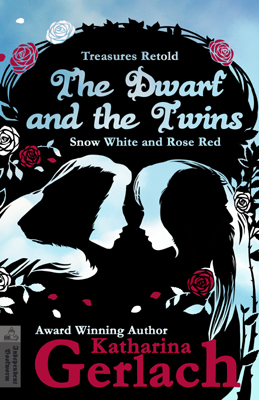 The Dwarf and the Twins

These days, I believe differently. So when my Muse (my creative side) offered me a series of fairy tale retellings at novella length (100 pages max.), I was delighted. In three months, I wrote three stories, revised them and translated two of them. There are more to come since I already got ideas for at least two more stories set in the same world. I’m having a blast.

But for now, I have the pleasure to announce the release of the first volume in my “Treasures Retold” series: The Dwarf and the Twins, a retelling of “Snow White and Rose Red” by the Brothers Grimm.

The original story tells of two innocent maidens who help a talking bear through the winter. They also help a vicious dwarf despite his bouts of anger. In this tale, the dwarf is a little different, as is the bear…

Martin lives a solitary life in the kingdom’s big forest. One day, he encounters a pregnant woman who is fleeing from the king’s soldiers. Little does he know that helping her will change his life forever, for the twins she bears will not stand idly by when his life is threatened.

The books in this series will all contain the retelling, a bonus story and the original tale (for some fairy tales will be quite unknown).

I hope you will have as much fun reading the tale as I had writing it. Please help me spread the word.