my experiences with diabetes (2) 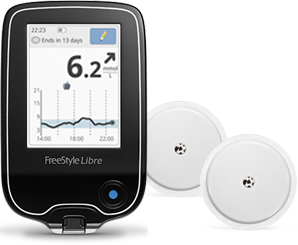 So, by the end of the first year I’d had about enough, especially of my inability to really tell how the sugar in my blood reacted throughout the day and for the different kinds of food.

Grinding my teeth at the price, I got myself a Freestyle Libre system (which isn’t paid for by German health insurance unless the diabetic is already using insulin) around Christmas 2016. It consists of a reading gadget (or an app for a mobile phone, only the most up to date kind, that they developed recently) and the pads (that’s the expensive part since each pad costs 60€ and has to be replaced every two weeks).

The gadget measures the sugar in the liquid in the subcutis tissue continuously. Setting the pad into my upper arm was easy and hurt me very little. Wearing it is no bother. However, I’ve had to learn to keep the arm on the side I’m wearing it away from door frames and other obstacles at arm height. Bumping into one can result in ripping out the pad. That doesn’t hurt much but empties your wallet pretty fast.

With the first pad put in place and activated, I began to experiment right away. I found a couple of patterns that helped me a lot in adjusting my everyday eating habits. I found that for me, eating a late breakfast (past 9am) led to less pronounced spikes of blood sugar than an early breakfast (6am) even though I ate exactly the same things. My body processes rice better than pasta. And taking Metformin after a meal helped me better than before a meal.

Of course those finds will differ from person to person, so it’s not too helpful for you. Still, it was a big improvement to be able to see how my blood sugar reacted when I ate. With the gadget I managed to keep my long term blood sugar HbA1c between 7.7% and 7.3%, but I did not lose another g/lbs of weight.

Then came chaos and stress (health issues in my whole family) and my blood sugar shot up. I was running around so much at that time that I did not gain weight again, but my long term blood sugar rose to 8.4% and my doctor wanted to put me on insulin.

I refused vehemently. Something had to change. Just monitoring the disease wasn’t enough. That was at the beginning of this year, and a book recommendation of my mentor Holly Lisle changed my life. With the preliminaries out of the way, I’ll tell you more about that next week.