I’ve helped my good friend William L. Hahn to bring this baby to live. The print version (for saving paper) is 764 pages long, but kindle inists it’s over 950. So you’ll get high value for your money. I suggest grabbing a copy if a) you love epic fantasy, b) you love looooong books, and c) if you prefer complex plots with many, skillfully interwoven story threads and intriguing characters. 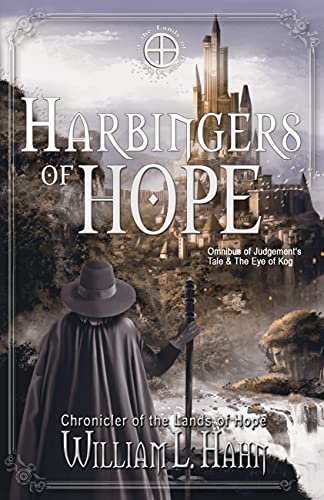 After two millennia of peace the relentless war between Hope and Despair flares again. With the innocent in peril, can raw unproven heroes resist immortal foes?

Treaman lives for the thrill of adventure. Guiding a group of enterprising companions, he’d put his life on the line for any of them. But when the adventurers become lost in a land tainted by the growing curse of Despair, he fears his leader’s mission is destined to end in failure and death.

Solemn Judgement will never see his homeland again. Brought to unfamiliar shores, Solemn burns any chance of return along with his boat and his father’s body, before setting out to seek his purpose. But the determined young orphan has no idea that acquiring his education could unleash the ultimate evil.

As Treaman and Judgement separately trek to seemingly inevitable doom, a prince seeks to rescue an old alliance, a mysterious fighter in black slays monstrous foes with his bare hands, and a broad cast of characters unwittingly play their part. All are hanging onto a slim sliver of Hope for their future. But even their combined might may not be enough to stop the ruthless march of a powerful necromancer and his tide of undeath …

In a world that only dreams of heroes, can they rise up against oppressive forces and prevent the Lands of Hope from descending into foul darkness?

Harbingers of Hope is an epic fantasy novel that will leave you breathless. If you like expansive worldbuilding, fierce magical battles, and monstrous enemies, then you’ll love William L. Hahn’s sweeping tale.

Read Harbingers of Hope to stand up and fight today!