You can find the schedule here and the giveaway here.

Sabio Marten is probably the most intelligent person on the Gendarmerie Magique. Aside from doing his work and inventing new gadgets to improve crime scene investigations, he teaches in Salthaven’s university. Here is one of his lectures for freshmen of Investigative Crime Detection (Sabio insisted I use his original papers including his graphics so I won’t get things muddled). Please keep in mind that the information presented is difficult, so if you don’t get it, don’t worry. You can eat your greens without understanding the details of how plants create matter from sunlight and magic.

In my opinion, Magical Basics should be obligatory for all university courses. It isn’t. Thus, I’m all the more grateful that so many of you attended this course. Let’s dive right in.

I’m sure all of you know the basic formula of Photomagysynthesis. However, I’m better safe than sorry. Photomagysynthesis is the process plants, from tree size to the smallest algae, use to turn sunlight, magic, water and carbon dioxide into sugar while giving of oxygen. For those of you chemically challenged, specialists would write it like this:

Just to make sure you understand this correctly, the numbers of hydrogen (H), oxygen (O), and carbon (C) have to be the same on either side of the arrow. The Θ indicates the magical enhancement. For those of you who don’t know, most sugars have a ring like structure of carbon atoms with hydrogen and oxygen atoms attached. In enhanced sugars, the magic curls up like a ball and sits in the center of the ring of carbon.

With the basics in mind, let’s look at how plants do what they do. Surely you’ve all heard of cells. All plants have cells with green organelles called chloroplasts. These contain so-called thylakoids. Those are membrane-bound compartments inside chloroplasts that look like piles of green coins stacked on top of each other. Their membranes contain molecule-complexes which absorb all colors of light except green. By the way, that’s the reason why plants are usually green. Only a few organisms use predominantly molecules reflecting red or yellow, and they don’t do Photomagysynthesis. They create unenhanced sugars. Their process is called Photosynthesis which is part of every basic biology lecture, so I won’t go into details here.

To make the molecule-complexes very effective, they have antennas using chlorophyll and other light absorbing molecules. Each antenna holds two to four hundred molecules absorbing energy and is referred to as a Photosystem. So, the membranes of the thylakoids hold everything necessary for the first step of the Photomagysynthesis, the light reaction.

During the light reaction, the chlorophyll molecules in Photosystem II use the sunlight’s energy to give off electrons that are then snatched up by a chain of electron transporting molecules. Every molecule in the chain uses up some of the electron’s energy and triggers the combination of Magie Sauvage with ADP and Phosphor to ΘATP. Yes?

Student: What is ADT and ATP?

Oh, you really want to know? Don’t say I haven’t warned you. ADP’s full name is Adenosine diphospate and ATP accordingly Adenosine triphosphate. You can imagine the molecule as a lorry for transporting energy to places where energy is needed – say for growth or movement. It’s just that ATP-molecules don’t keep, so life had to find a way to store energy for longer than the normal ATP-lifecycle. That’s where the sugar comes in. And that’s why we need to know about Photomagysynthesis.

Now, to get back its electrons, the chlorophyll steals new electrons from water inside the thylakoid. That action breaks the water molecule. This process is called the photolysis of water. The oxygen atoms combine into O2 and travel out of the plant. Lucky for us or we couldn’t breathe. 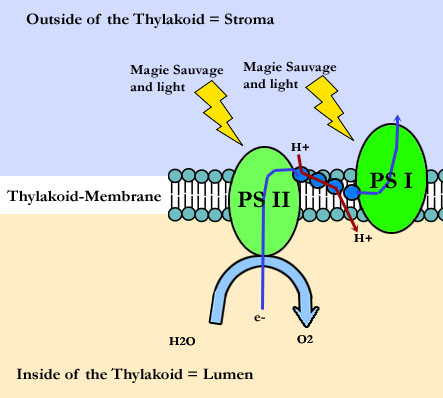 They leave behind hydrogen atoms that are missing an electron – and a lone rider like that is called… correct… a proton. The protons are transported out of the thylakoid by an enzyme that works like a one way revolving door. As the proton is pushed from the inside of the thylakoid to the outside, the enzyme creates more ATP, this time unenhanced. To fill up the void left by the protons, new water streams into the thylakoid through the membrane, thus keeping the photolysis going.

creation of ATP and transport of protons out of the thylakoid

At the same time, the electrons that went through Photosystem II and the chain of electron transporting molecules reach a second photosystem. Photosystem I re-charges them with sunlight, and hands them to a second chain of electron transporting molecules. At the end of this chain, the electrons are used to combine two waiting protons with a stuff called NADP… what? No I won’t tell you the full name this time – go join a biology class… 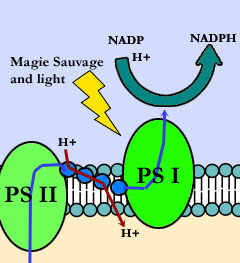 As I said, two protons combine with NADP and Magie Sauvage to ΘNADPH2+. This molecule is like a shopping cart for protons. It takes them to the place where the second step of the Photomagysynthesis takes part. Here’s a graphic presenting the whole light reaction at once.

Now for the second step – The molecules produced during the light reaction are used to build sugars out of carbon dioxide. Since the second step isn’t directly dependent on light, it is often referred to as light-independent or dark reactions. But because it uses molecules from the light reaction, it still is indirectly dependent on light, so the expression is misleading.

The normal three-carbon-sugar molecule grabs more carbon dioxide molecules and uses ΘATP and ΘNADPH2+ from the light reaction to recreate the initial five-carbon-sugar in several steps. It’s a form of recycling to make sure the plant doesn’t run out of five-carbon-sugars.

The second, enhanced three-carbon-sugar merges with another of its kind. The result is what we commonly refer to as sugar. Since it was built from two enhanced molecules, it is also magically enhanced with the magic caught in the center of the ring structure.

This sugar is then transported out of the chloroplast and distributed to wherever in the cell it is needed, or it is put into storage. When the enhanced sugar gets digested, the magic inside the molecules has been significantly altered by being balled up. It is set free as Magie Générale.

Herbivores or omnivores like us keep part of the enhanced molecules in their metabolism. Carnivores and omnivores receive their share of Magie Générale from what remains in the food chain. Are there questions?

Student: So I get more magic when I eat more greens?

Unfortunately not. It has been proven that the limiting factor for the amount of magic a human can hold is not related to the amount of plant matter consumed. There’s no need to become a vegetarian if you’re not so inclined.

Student: Is there a way to make someone’s magic stronger? What does limit the accumulation of magic?

The limit is defined by a genetically predetermined threshold that differs for every individual. Research suggests… No, I think I’ll better stop here. This is not about Photomagysynthesis any more, and I don’t think the university would be happy if I held you captive for one of my rants. Thank you for listening today, and I hope to see you again when I talk about our relationship with nerls, next week. Good bye.

(editors note: Did you understand all that? Where did you stop? I did tell you he’s a geek, right? Let me tell you a secret: so am I – I love this stuff!)