The Next Big Thing Blog Hop 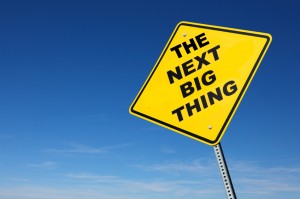 Peter Cruikshank, an aspiring novelist has tagged me as The Next Big Thing. I feel honored that he picked me, especially since he based his decision on my book “Urchin King“. OK, I could have done without the extra work (I’m in the last throws of translating the last German novel into English), but I enjoyed his answers to the questions nonetheless. I hope mine will be as entertaining and enlightening. Feel free to leave a comment (oh, and my nominations are at the bottom of this post).

1. What is the title of the book?
Well, at the moment, I’m sitting on five unpublished YA books:
Paralan’s Children (a Science Fantasy story set on an ice world)
Scotland’s Guardians (an Urban Fantasy story about Scottish myths and legends)
Victor’s Rage (stand-alone sequel to my historical novel “Ann Angel’s Freedom”)
Chasing the Grimm Reaper (a non-linear fairy tale murder mystery) and
Swordplay (an Urban Fantasy murder mystery, first in an of yet unwritten series).

2. Where did the idea for the book come from?
I find my ideas everywhere. They’re a dime to a dozen. My kids often complain that I turn reality into make believe stories too often. Still, they like it. I spin stories wherever I go – it was a logical step to start writing them down. The real challenge is to find/make the time to do that. I’m getting better at this all the time. Two years back I hardly managed 500 words a day (my kids were still at home back then), now I’m doing 2000-3000 words on my translations with the weekends off. In November, I’ll see if I can keep up that pace with original writing too.

If an idea manages to get so strong that I cannot write anything else, I start plotting and then write it down. I’m currently working on a fantasy story with a Stone Age Africa setting. It’s so much fun to merge true facts with thought out culture. The idea came to me when I visited a museum with a friend. Beside the Egyptian display, they had a small part of the exhibition dedicated to the Nok-people of Africa who were able to forge iron 800–500 BC without any indication that other metals had been forged before that (meaning there was no Bronze Age before that). Also, I remembered a tale we once had to read where the woman in charge of rain had fallen asleep. Pang, there was the idea of a sleeping rain goddess in Africa with a young witch the only person who knows. Once my Main Character is born, the story practically develops on its own.

3. What genre does your book fall under?
All my stories are either Young Adult or Middle Age and all contain some element of history (sometimes made up history but more often than not it’s genuine). I’m a history geek and try not to let it show too much in my novels. Also I’m a great fan of fantasy (less epic, more urban), so a lot of my stories are in that genre too.

4. What actors would you choose to play your characters in a movie rendition?
I couldn’t say. I’m not watching TV or the movies a lot (due to time constraints and the long distance to the nearest cinema), but I’d love to have Sean Connery in one of the films that will no doubt spring form my work. 😉

5. What is a one sentence synopsis of your book?
Paralan’s Children – Rookie Vera Staven of the Galactipol has to combine forces with the supposedly dumb polar-bear like natives of the ice-world Paralan to find fifteen missing wee-ones before they are murdered.
Scotland’s Guardians – Book-rat Bryanna follows her kidnapped father into the world of Scottish folk lore and learns that she is supposed to kill her father to take over her job as Guardian.
Victor’s Rage – When Rieke Waldmann learns she’s supposed to marry the miller’s son, her beloved William sets out to earn money so he can take the miller’s place. But instead, he gets caught up in the German Revolution of 1848, and Rieke discovers her late father’s secrets that might stop her from getting married at all.
Chasing the Grimm Reaper – The Fairy Godmother has been murdered, and Sherlock Holmes isn’t too keen on taking the case, so I, the reader, take over. Now it’s up to me to decide on the right course of action to reach the end alive.
Swordplay – Moira has applied for work with the Gendarmerie Magique, her lifelong dream, but since her magic readings are way too low, her stay isn’t guaranteed which endangers her involvement in a case of stolen antiques more deadly than anticipated.

6. Will your book be self-published or represented by an agency?
All the German versions of my book are under contract with a very good German agency. Still, they weren’t able to sell them to German publishers — not for their quality though since every editor I talked to really would have loved to take the manuscript but they couldn’t find the right label to put on them.

At the beginning of last year, I started going Indie. My first release, “Urchin King” is garnering a lot of respect and great reviews and it’s sales are slow but steady. My historical novel “Ann Angel’s Freedom” took of running and sold 4000 copies in two days at a promotional price. So, for me, the Indie route is the one I’ll travel for the rest of my career.

7. How long did it take you to write the first draft of your manuscript?
That’s hard to say. Nowadays, I take 2-3 months for the first draft of a novel, rarely longer (it’s teh revision that eats up most of the time). But my first novel took 3 years before the first draft was done, and it was only 175 pages long. 😉 I think the daily wordcount increases the longer I’m at it.

8. What other books would you compare this story to within your genre?
Sorry, I can’t say. I do hope that my fantasy stories are comparable to those of Diana Wynne Jones. But I don’t really care all that much as long as my readers love them.

9. Who or what inspired you to write this book?
I’ve been influenced by many writers, the most prominent are Astrid Lindgren, Diana Wynne Jones, and Neil Gaiman, but my main inspiration has always been my family. The kids are so eager to lern about my stories, I just couln’t NOT write them down. Also, the health of my husband is deteriorating fast, so I’m struggling to replace his income. I’d love to tell him to retire in 3-5 years if possible. I think it’s the strongest motivation anyone can have.

10. What else about your book might pique the reader’s interest?
All my books have sophisticated worlbuilding. As a studied forester with a PhD in ecology, I know my science and apply it ardently to any new world I create. Also, I’m a great fan of history (not such a great fan of the research though) and with the help of my best friend and my husband, I manage to find the details that make my historical worlds come alive. My stories are always a mix of entertainment and knowledge. Readers can simply enjoy the story, or they can discover and learn new things if they are so inclined.

That’s it. Now, for the fun stuff. I’m allowed to choose up to five authors I believe would make The Next Big Thing, and I already know who I want to nominate:

Holly Lisle – the most hard working and talented author that I personally know
William Hahn – the only author of epic fantasy that I enjoyed reading (so far. I haven’t sampled Peter Cruikshank’s tales yet)
J.A. Marlow – a superb author of Science Fiction tales for all ages
Danyelle Leafty – a crafty twister of lesser known fairy tales
Emily Casey – another crafty twister of fairy tales (can you tell I love twisted fairy tales?)

Now, I hope these authors have just as much fun (as many problems) to answer these questions as I did.
Are there questions you’d like to get answered that weren’t in this list? Leave a comment and I’ll do my best to get to them in a timely manner.

First and foremost, one of my short stories was accepted for an anthology that will be published early next year. The best thing is, that they’ll pay for it — not much but I will get free copies too. It’s my first ever paid publication in the USA! Hah! I was so delighted, I spend my weekend (plus a few days before that) on making a book trailer for my novel “Urchin King“.

I’d love to put it on the product page on amazon like I did on the Smashwords site, but I haven’t got any idea how to do it. As far as I can see, I can only upload pictures. Hmmm. I think I’ll send amazon support an email. Let’s see what they suggest.

For those of you interested in ecology or world-building, my well loved “33 Mistakes Writer’s Make About Mother Nature” is back up for sale. You will find all of the “33 Mistakes”-books as eBooks on amazon. 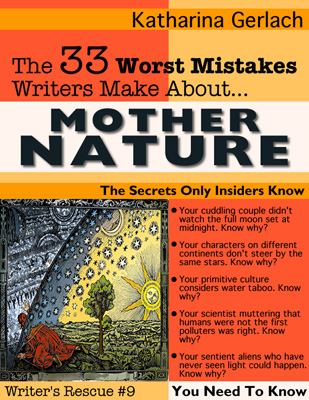 How about you? Do you like the trailer (BTW, the voice in mine and I DO have a Scottish accent — nee bother)? Have you ever made one yourself? Have you got a favorite booktrailer? I loved the one for “Mrs. Peregrine’s Home for Peculiar Children”. That was a really awesome trailer. Unfortunately, I can’t do video, so the slides had to suffice.

I wish you a wonderful time,

John Byk interviewed me about my eBook Ann Angel’s Freedom and about publishing in Germany in general. If you’ve wondered what I sound like, here’s your chance to listen to me interrupting the moderator all the time (yes, it’s really hard to shut me up when I start).

Also, I forgot to say that my eBook Ann Angel’s Freedom is still free on amazon (any amazon site) until midnight US time (that’s roughly 9 am tomorrow morning in Germany). So if you want it, go and get it before time runs out.

How do I keep happy with all the wrinting I’m forcing myself to do?

Funny you should ask. That’s exactly the question Trish from “Contemplating Happiness” asked me. Check out my reply.