The German bloggers of “Our Favorite Books” (Facebook and Webseite) had a genius idea. A whole group of authors and bloggers will each write monthly posts to the following themes: 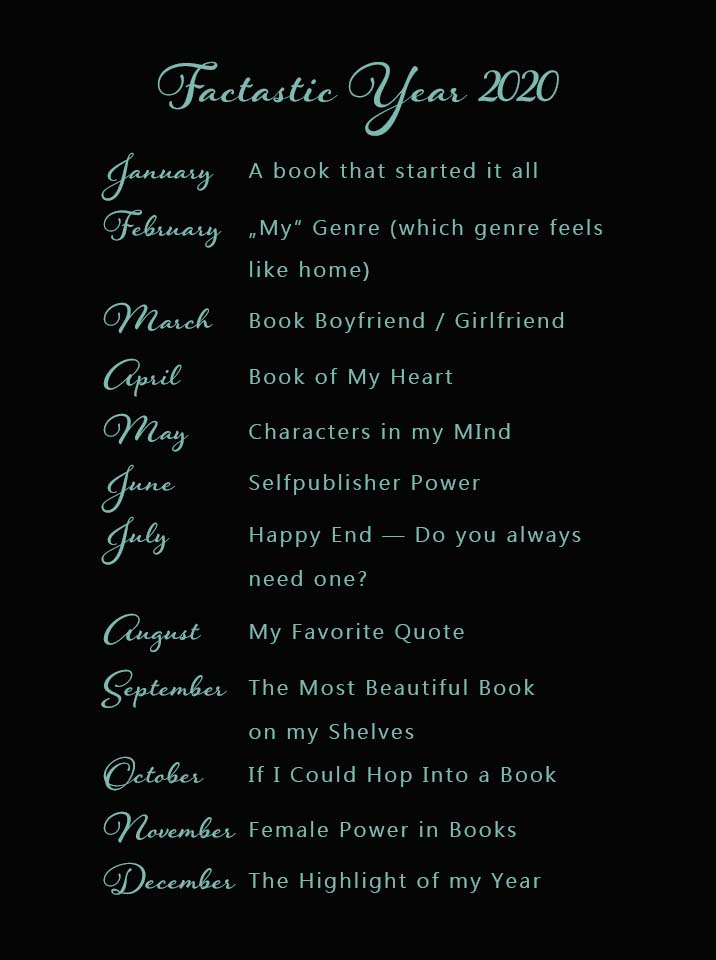 Since I’ve had problems blogging regularly (blush), I promised myself to be active this time. At least once a month I’ll write something so you’ll know what’s going on. Aside from the themes posted above, I’ll inform you about where I am with my current writing project.

My posts will go life on the 15th of each month here on this website. This is not a New Year resolution (those always fail), but something I’ll do long term. I’d love to see you comment once or thrice because I enjoy feedback of every kind.

Here’s the last post for the A-Z Blogging Challenge. It was a lot of fun but also very tiring, especially since I’m going to start my Kickstarter campaign in a few days. Here is a little poem called “Zebrastreifen” (zebra stripes), first published in 2007 in the book Wortbeben.

To understand this poem, you need to know that in German, a crosswalk or pedestrian crossing is called Zebrastreifen (zebra stripes). I know that the translation is less then perfect, but it’s a fun little poem and I hope you’ll like it despite the slightly bumpy rhythm.

Zebras range veldt and wilderness
calmly, side by side
like a picture peaceful and clear.
Life’s very diff’rent over here:

Runabouts jetting and dashing,
clanking and squeaking and crashing.
Your friendly police with their speed traps
know ev’rything here’s up for grabs.

Humans and animals, though strangers,
Need safety both from dangers.
The question is: who, in its section
of world, is best using protection.

The stripes on a zebra, long and bent
confuse tsetse flies, dodge their prick and ailment.
In our world, stripes on the road are wont
to save us from tires – but sometimes they don’t.

Young Adults drive me nuts, but they’re also the age group I love to write for. I guess it comes from being semi-stuck in my teens mentally. I remember how hard it was when you weren’t a child any more but not a woman yet. Also, I see my teen daughters struggle. Puberty is probably the hardest time in a person’s life. Everything changes including your own body. Books kept me grounded (as they do with my middle daughter). How about you? Are you a teen (or do you at least remember your time as a teenager)?

This is all I’ll say about X-Men: Hugh Jackman (ok, he’s one reason I am using the Oxford comma, but not the only one)

Swoon… he’s as sexy as my husband and that says something because my husband is the best and sexiest man alive!

A friend of mine is dying with no chance of a cure. This caught me cold since he barely escaped death after a severe accident a few years back. Instead of being devastated (I’m sure he ranted at some point but he didn’t share that), he decided to enjoy what little time he’s got left. When I last talked to him (it’s hard for him to talk), he reminded me that as long as I remember him, he won’t be truly gone. So I recorded a song for him that is tied to one of my fondest memories of him. Enjoy it with me, will you?

Lili Marlene, sung by me (therefore not perfect)

V – Veritas in eBook (or a writer’s despair)

I’m always extremely excited when a reader takes the time to write a review for one of my books. However, they don’t always turn out the way I want them. Although I know that I will never be able to please every single reader out there, I always despair when someone doesn’t like what I wrote. I’ve often wondered why. The answer is probably more complicated but I think, it’s because I care so deeply for the characters I write that I want people to like them.

The truth is that no one knows them the way I know them. No one cares for them as much as I do. So if a reviewer rejects my characters, it feels as if (s)he rejects some part of me. I know that’s not true. Most of my readers don’t even know me. Still, the feeling persists.

Of course, I’m getting much better at handling this disappointment. I just start writing a new book. Apropos book, I’ll be releasing something new soon, just in case you’re interested. If you haven’t already, sign up for my list so I can keep you posted.

In writing, I face unexpected challenges often. Mostly when my characters start doing things on their own without consideration to what I had plotted or planned for them. Usually, that requires either a change of plan (which is what I do most of the time) or a change of the character (which I do when (s)he derails the story too much). However, I face unexpected challenges in RealLife™ too. My two youngest are both in puberty which keeps my life… let’s say interesting. 😀

How about you? What kind of unexpected challenges have you been facing recently?

First things first: today is “Blogger Schenken Lesefreude” (bloggers give reading pleasure) day and I’m participating. You’ll find the giveaway below my blogpost. But first a few words about people I admire:

I thought I’d tell you something about translators today. Their names are always in the small print, implying they’re unimportant. On the surface, that might be true. After all, it’s the author who wrote the novel, right? Well, sort of. However, the influence on the novel (and its success or failure) in a different market depends a lot on the translator’s talent. By choosing the right words and putting them in a specific order, (s)he creates the atmosphere needed to carry the story through the new language. So, let us appreciate the hard work of these people. Do you know someone who translates texts?

Here’s the giveaway. Participating is really easy, and everyone who enters will get at least an eBook:
a Rafflecopter giveaway

Although I’d love to, I’m not going to hold a biology lecture on the subject, promised. This post focuses on another aspect of creating stories.

Humans have two sides to their brain that handle different things. The right brain is considered the creative side and the left brain is thought to handle logical aspects. I, as an author, even go so far as to identify them as separate entities. I refer to them as my Muse and my Editor. When I’m writing first drafts, my Editor is slowing down my Muse, and when I revise, it’s the other way round. Thus, it is really hard for me to write more than 1500 words a day.

However, when I looked at the two more closely, I found that they are working together well and that I profit from it. They give me interesting stories that make sense, all things considered. And they get to connect with people other than me through my keyboard. In that sense, this is a relationship where all sides benefit – and that is considered a symbiosis. Isn’t that strange?

Here is a little film I made for my kickstarter campaign which will start early May. It’s a trailer for reMIND. Enjoy and let me know if you like it.

By the way, I’m still looking for helpers. If you want to help me spread the word about the campaign, please sign up below. I promise I will only use your information for the kickstarter campaign and delete it right after.