back from the summer with alien news…

Usually, I wouldn’t write anything specific about my private life (that’s why it’s called private, you know) but this time, I’m going to make an exception. For a reason.

Most of you might know how much I love to combine knowledge and fun. I like nothing better than reading a book I thoroughly enjoy only to find at the end that I learned something too. I’m trying to do the same in many of my books, especially the historical fiction.

During the summer holidays, I participated in a night walk through a Slovakian forest that achieved just that. Like most kids, yours might not like going out for a walk even if it is at night and in a forest. My kids at least weren’t very keen on the idea. With a forester for a grandfather, they thought they’d seen it all. However, I knew they were in for a treat. First, we were in Slovakia at that time (and their forests are a little different from ours), and second, a group of locals had prepared an elaborate background to make this walk more interesting for kids. The tour was open for children from 8-13, but since my girls are not good enough with their English (yet), I was allowed to accompany them.

The organizers pretended that an UFO had crash landed in the forest. Men in Black were searching the area trying to find the one surviving alien. Their scientists were examining the UFO’s energy source. Luckily, a group of people had decided to help the alien get back his energy so he could return home. They were the ones leading the kids through the forest.

At the place we had gathered, there was a tent with information about stars, galaxies, the universe, and the biology of the alien who crashed the UFO (for obviously, some of its comrades had not survived). We set out in small groups of 3-5 children and passed 9 stations where the kids had to perform small tasks. The first was an astrologist who explained the stars and where the alien had come from. At the second station, the kids had to steal the UFO’s energy bulbs (little glowing plastic containers) from the lab. At one point, we were captured by MIB’s who searched unsuccessfully for the energy bulbs (the kids were delighted they hid them well enough) and took photos and finger prints. Another time, the army, in charge of the safety of the area, lead us on a detour through a low tunnel and past the crashed ship (illuminated with flickering Christmas lights – unfortunately the photo didn’t turn out well, see above).

After much cross country walking in the dark (we crossed a brook twice), we reached the alien, and it was the highlight of the walk (see picture). It was extremely thankful for the help. Each kid got a little reward, and then we could go home. I was delighted by this little play. My kids never noticed how fast two hours had passed. 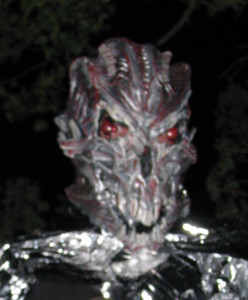 Advice for teachers: if you want kids to learn something, make it fun. My kids are still talking about stars and galaxies two weeks later.

6 thoughts on “back from the summer with alien news…”