Arranged Marriage – what would I chose?

My friend Crystal Collier’s first novel “Moonless” will be released in print, and she’s holding her first ever blogfest. For those who come to this site through Crystal’s blogfest, I’m currently running a blog tour where you can win my newest release “Swordplay”. Look here for infos about the book and the giveaway and here for the Blog Tour schedule. 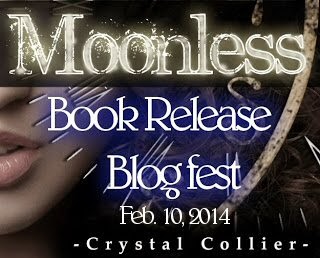 Her AMAZING co-hosts are Pk Hrezo, Tammy Theriault, and Michael Di Gesu (I know two of the three, and ‘amazing’ fits quite well). To make the blogfest more fun for all, Crystal asked her friends to post the answer to the following question on their blogs today:

If you lived in a society where arranged marriages were a la mode, who would you beg your parents to set you up with? (Literary characters and celebrities welcomed.) Who and why?

But first, let me tell you something about her most amazing book (I already read the sample, bought it, and will be reading it on my trip to Texas in March. I’ll post a review when I’m done).

In the English society of 1768 where women are bred to marry, unattractive Alexia, just sixteen, believes she will end up alone. But on the county doorstep of a neighbor’s estate, she meets a man straight out of her nightmares, one whose blue eyes threaten to consume her whole world—especially later when she discovers him standing over her murdered host in the middle of the night.

Her nightmares become reality: a dead baron, red-eyed wraiths, and forbidden love with a man hunted by these creatures. After an attack close to home, Alexia realizes she cannot keep one foot in her old life and one in this new world. To protect her family she must either be sold into a loveless marriage, or escape with her beloved and risk becoming one of the Soulless.

***Coupon Alert*** Crystal’s publisher is offering a $2.00 coupon until February 14th!!  To take advantage of this awesome offer, click the link below and use the coupon code!
Book link: https://www.createspace.com/4550104
Coupon code: LQJM3F84

Now, for my answer

At first, I thought it’d be difficult to pick my dream match, but as it turned out, it was the easiest thing in the world. Of course, I would beg my parents to marry me off to my ex-boyfriend, ex-fiancée, and now husband. We’ve been an item for close to 30 years already and there’s no one in the world who can compete with him (despite us both getting old and crinkly).

However, I don’t think that was what Crystal had in mind when she asked. After all, being madly in love with your own husband is rather boring, right? So I though for a while who else would suit me, and I really found one. A single character out of a myriad of people (fictional and real) … does that tell you something about me? OK, I’m not going to keep you on tenderhooks. The guy that might, with a lot of luck, tempt me is:

He’s the humanized demon from “Good Omens – The Nice and Accurate Prophecies of Agnes Nutter, Witch” by Neil Gaiman and Terry Pratchet, one of my all time favorite novels. What I like about him is his way to see the world. He realized that humans are their own worst enemy and that demons aren’t really necessary to bring about our own downfall. At the same time, he doesn’t want that to happen. Also, he’s the best (only) friend of an angel and despite being a demon, he’s very, very human. But since I haven’t finished reading Moonless yet, there’s still a chance that Crystal’s romantic lead might make me change my mind. 😉 Now, go and get Moonless form Amazon or read the answers to Crystal’s question on the other blogs. Here’s the list:

32 thoughts on “Arranged Marriage – what would I chose?”