I’m struggling. Are you too? 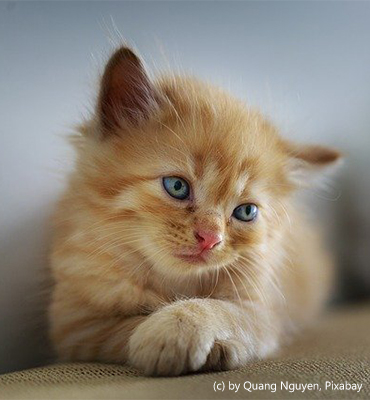 Long time no see/read … and I’m very sorry about that. Like for many people, my life has changed a lot during the pandemic. I was quite productive (I wrote 52 short stories last year) and enjoyed the time as best I could. Of course there were many things that took a lot of adjusting, but I never lost the urge to write.

That changed drastically at the beginning of this year. I began to avoid my novel. Instead I planned another three that are now waiting to be written, and dabbled in short and flash stories. Those are fun but not as satisfying as novels. Then the war in Ukraine started, and I haven’t been able to write more than a few words since then. Not even the writing event Camp NaNo changed that (and I had high hopes).

The flurry of activities, the noise (even though mostly happy), the returning people (or dear, the people, even family and friends) seem to be too much after more than two years of silence. Analyzing my feelings (or temporary lack thereof), I think I have some form of depression or burnout. It’s not that I don’t want to write, I do, I just can’t seem to get myself to actually do it. It’s a pattern I know from both my husband and son. So I decided I won’t allow myself to remain in this state. That only brings about self-pity. From my husband and son, I’ve learned that slow and steady with plenty of downtime gets one back on one’s feet.

So I’m setting myself some small goals. I decided to post each one here to see how it goes. As you know I’m not tremendously good at writing blog posts regularly, but I’ll do my very best. Maybe seeing me making progress and relapsing but never giving up helps you, too, to adjust to the new normal.

My first goal was to update the website, which I did successfully. I added all the short stories that were published over the last two years, and since they didn’t fit into the menu any longer, I put them on a separate page.

I even made a cover for the story “A Twist on Katlani’s Plan” that I’m quite proud of. I sold it in February 2021 and it’s free to read. Check it out if you want and let me know if you like it.

My next goal is to write an interesting Flash Fiction story for the upcoming bloghop. We’ll see how that goes. I’ll do my best and hope you will too.

More cats than you can handle?

I have always been awed by cats even though I don’t tolerate them in my house. I just don’t like the way they climb over tables and clean kitchen surfaces. Also, I grew up with dogs and have no idea how I’d go about training a cat not to seek the highest vantage point. It’s their instinct. But that’s okay. I can admire them from afar or when they belong to someone else. And in fiction of course.

There are so many great stories with cats out there. They can be found in all kinds of stories which seems logical considering the fact that cats always show up in unexpected places. And although I’m a dog person (mostly), cats have invaded my fiction too. You can read one of them in a bundle with ten stories from varying genres all with cats which will be available for three weeks only.

But the best thing is that you get to decide how much you pay. For as little as $5 (or the equivalent in your currency plus applicable tax) you’ll get four full novels: Unfair Magic by Bonnie Elizabeth, Delectable Mountain Quilting by Debbie Mumford, Otherside by Barbara G.Tarn, and The Task of Auntie Dido by Ryan M. Williams. If you’re willing to spend $20 or more, you’ll get four more bonus novels/novellas (The Fates Trilogy by Kristine Grayson, Bookshop Witch by T. Thorn Coyle, The Inheritance by Katharina Gerlach (me), and Big Eyes by Dean Wesley Smith) and two short story anthologies (Unexpected Cats by Annie Reed (exclusive to this bundle!), and The Year of the Cat: A Cat of Fantastic Whims by Kristine Kathryn Rusch and Dean Wesley Smith).

I told you it might be more than you can handle. 😀 So head over to get the bundle right now or read more about the stories and their authors below.

Oh, and if you decide to get our stories, please do let us know how you liked them. You can do that on Amazon, B&N, Goodreads, iBooks, or any place else that allows you to post your opinion. 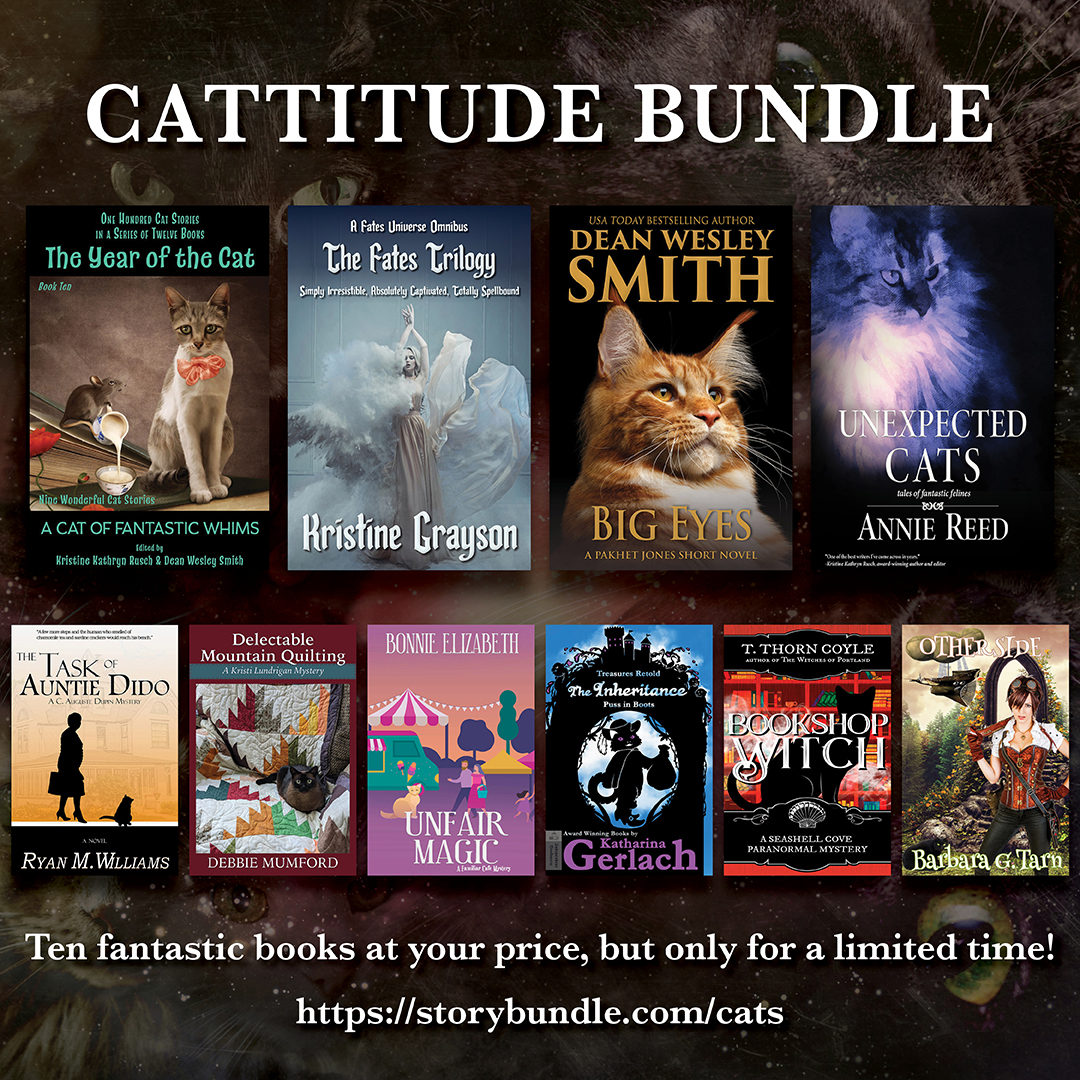 Here’s what Dean Wesely Smith has to say about the bundle (excerpt only, read the full post on the bundle’s website):

Every type of story imaginable, a writer has put a cat in it.

And yes, I (Dean) am no exception to that rule.

And neither is my wife, writer Kristine Kathryn Rusch. In fact, in this bundle, Kris has added in her Fates Trilogy, three of her fun fantasy novels in one bundle written under the name Kristine Grayson. Yes, all kinds of cats.

For those of you who don’t know, Kristine Kathryn Rusch is a USA Today and New York Times bestseller with almost 200 novels and hundreds and hundreds of short stories to her credit.

So when I started to put together this fun bundle, after getting the bundle from Kris, I got a book from German author Katharina Gerlach, who goes by the name Cat. Not kidding. She had a wonderful book titled THE INHERITANCE that is a fantasy retelling of Puss in Boots. A really fun read.

Cat has published almost thirty novels and books, mostly in English, and has had her stories picked up by major magazines and anthologies, including I must say, my magazine, Pulphouse Fiction Magazine.

Staying with fantasy books for the moment, Barbara G. Tarn writes mostly fantasy novels and short stories of all types. She sent in a novella titled OTHERSIDE where a cat turns into a man through a magic steampunk world portal and it gets even crazier from there. Really fun.

I also got from writers two different paranormal mystery novels that have cats. The first novel is from Bonnie Elizabeth titled UNFAIR MAGIC which is in her Familiar Café series. Bonnie not only writes about cats, but she lives with cats as well.

The second paranormal mystery I got was from T. Thorn Coyle titled BOOKSHOP WITCH. This is in her Seashell Cove Paranormal Mystery series. Thorn is a prolific writer of both fiction and nonfiction.

Moving from paranormal mystery to straight cozy mystery, Debbie Mumford offered up DELECTABLE MOUNTAIN QUILTING which is in her Kristi Lundrigan series. Debbie is known for writing mostly fantasy, paranormal romance, and science fiction as well as cozy mystery under her Debbie Mumford name. She also writes science fiction and fantasy for young adults under her Deb Logan name.

Now taking cozy mystery even one step farther into the cat world, Ryan M. Williams gives us THE TASK OF AUNTIE DIDO in his C. Auguste Dupin series. And this book is from the cat’s point of view. Great fun and it works completely as a cozy mystery. Ryan works as a full time librarian.

I added a novella into the mix called BIG EYES. The novella is in my Pakhet Jones series. Pakhet is a superhero in the world of cats, existing in the Poker Boy universe. And yes, in this novella, Poker Boy makes a couple of guest appearances as Pakhet and other gods and superheroes struggle to find out who is attempting to kill cats with a powerful new weapon. For those who don’t know me, I am a USA Today and New York Times bestselling writer of over 200 novels and many other books. I also edit the popular cross-genre magazine Pulphouse Fiction Magazine.

Now, a bundle called CATTITUDE would not be complete without two books full of cat short stories. So I contacted Annie Reed, a writer of immense skill and a cat lover bar none. She just happened to have a collection of cat stories called UNEXPECTED CATS which are tales of fantastic felines. Annie was nice enough to hold publication on the collection so that it could be exclusive to this bundle. I have bought a story from Annie for every issue now of Pulphouse Fiction Magazine. That’s how good she is.

And to round off the bundle, a year ago Kris and I edited THE YEAR OF THE CAT, twelve volumes of nothing but cat stories. So I thought it would be great fun to put in one of those titled A CAT OF FANTASTIC WHIMS.

And remember, when you grab this fantastic bundle that will only last for three short weeks, toss in a little for our charity, AbleGamers. A fantastic cause.

I hope you enjoy all the great cat stories in this bundle. I sure had a wonderful time putting it all together. – Dean Wesley Smith

Convinced you NEED to check out this bundle? Go straight to the good stuff and enjoy!

Looking at the year I feel positively SciFi. 😀
Being buried in tax papers, I was glad that someone reminded me of the quarterly bloghop. This story is a little darker than usual. Blame it on the weather or on my mood. I still hope you’ll like it. You’ll also get free short stories from the other participants. As usual there’s a list at the end of this post. Enjoy and leave a comment!

The Beauty of Rainstorms

Frozen in my bay window seat I seek solace in neat rows of books, well placed trinkets, and carefully arranged furniture whenever lightning illuminates them.

I flinch at every earsplitting thunder-crack, remembering the earth-shaking explosions, the sirens, and how – secretly shivering with fear – Mother used to read to me in the bomb shelter’s gloom. Her voice was all that kept panic at bay. Her words painted pictures in my head, so vividly I no longer smelled the dust hanging in the air.

I don’t want to think of our flight. The waves’ thunder, the salt on my lips and skin, the burning thirst – worse than hunger – and the scared gazes of men, women, and children are burnt into my soul. Although I cannot know the number of boats like ours that were swallowed by the ocean, I feel their once living cargo in my heart. A stone of the beach we landed at still lies on one of my shelves. It gives me strength when my heart can no longer bear the burden of my fear.

Now, I’m a mother myself and I read to my own daughter. During thunderstorms I sometimes hide in her bed, sucking in the scent of diapers and milk. Then, she’ll close her tiny arms around my neck, and I know the world won’t end – like it didn’t end in the bunker, like it didn’t end on the ocean.

If only my sweet daughter would be here with me now. Her room is endlessly far away, and my legs don’t obey. The storm’s chaos and noise paralyses me. Like a laughing giant, it plays with my memories, my fate – one of many – as if to prove how unimportant one human life is. And still, I’m here, even though I I sit and stare silently at my orderly room, fighting panic.

The door opens and my daughter bursts in, delighted by every kaboom. Her laughter against the giants’ grumbling. My living whirlwind careens through my sanctuary and hugs me with all her strength. While she holds me, she talks about everything and nothing until I finally relax.

Maybe with her it’s possible to rediscover the beauty of rainstorms.