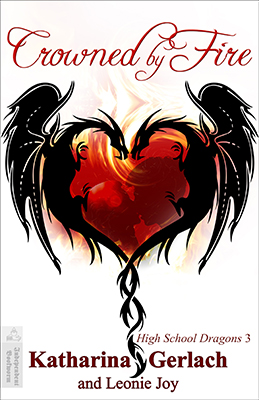 a love story with dragons

Soon after the Chinese declare war, Lydia notices that the American dragons need a royal leader if they’re to survive. Now she’s facing the choice of saving her dragons and abandoning Colin or vice versa.

Also, she bears the burden of a timid Chinese dragoness with little self-esteem who is obviously falling for the last trained dragon hunter. The problem with that? The dragon hunter has been born female.

And her friend Nicole is no help either since she still can’t control her overflowing magic. She’s a catastrophe waiting to happen.

What are Lydia and her friends going to do to stop the war, punish the traitors, and bring peace to all of dragonkind? Will they be able to hold on to their loved ones when the whole world seems to have turned against them?

I developed this fantasy romance series with one of my children, aged 15. We deliberately targeted the idea and its execution at young-ish teens (and those who are still that age at heart). It was planned as a trilogy from the start (no endless series for me, thank you) and features a different couple’s love problems in each volume while simultaneously adding to Lydia’s journey as a potential queen. We both sincerely hope you’ll like these stories.