I was born in Paderborn on August 2nd, a warm Friday morning of the year 1968. My mother dreamt of fried sausages and a giant ice cream. Instead, I caused her more than 8 hours of pain until she squeezed me into the world. Although it was rather exhausting for my mother, it was luck for my brother. He was born eleven months later, the umbilical cord wrapped around his throat thrice and three times around his belly. If I hadn’t been such a heavy baby, he would have died due to a lack of air. The way it was, he didn’t take much more than half an hour to be born. So, if you take the average time of both births it wasn’t too bad for my mother. 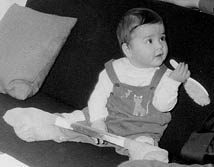 I was a dark baby with deep black hair which lightened in the following years to a dark brown with reddish strands in summer.

Just as I started to walk the doctors discovered a problem with my hip. I cried when they put the hip in a plaster but several months later when they removed the plaster I cried too. I had got used to the “dumb” thing. This was the first time my father said that I am as stubborn as a mule. It wasn’t the last.

Since my father was a forester, we lived in the proximity of Lübeck in the forester’s lodge Wesloe. My mother stayed at home, cared for us and helped father with the office work. She was the heart and soul of our family. For me and my two brothers it was a time of adventures, magic and fun. We sunbathed naked in the snow, played happily in the mud, visited the forestry workers on the other side of the street and learned to understand and to speak Lower German.

When I turned five (my brothers were four and two), my father applied for work in another town and got the job. During the moving, my parents “parked” us at an aunt. A lamp stood next to my bed with a cable lying directly beside it. My aunt told us we shouldn’t touch the cable since a dangerous current would be flowing inside. Curious as we were, we got ourselves some scissors, turned on the light and cut the cable to see the current. My aunt noticed it just in time… 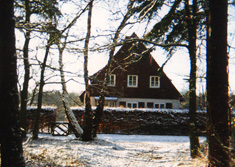 the forester’s lodge of Uelzen

Our new home was in the Lüneburger Heide in the middle of the communal forest of Uelzen. Trees and a couple of fields surrounded us. We went on expeditions, made new friends and did not miss our old home one bit. Every evening our parents sang us a song (a different one for each) and read us a story. Most of all, we loved the books of Astrid Lindgren. The only one we didn’t like was “The children of Bullabü”. Their adventures seemed boring compared to ours.

When I started to school with 5 ¾ years a new universe waited for me: books. I could hardly read when a part of me left reality for good. I dreamt of becoming an author and although there were times in which I didn’t come any closer to this dream I never lost my focus. 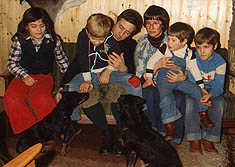 When I was seven, my youngest brother was born who was greeted enthusiastically by us. Finally, our fights were two against two and thus more or less balanced. Approximately at this time I decided to become either a forester or a midwife. This combination isn’t as strange as it might seem. Both jobs have something to do with the most marvelous form of biology: the wonder of the life.

my boyfriend and I

I started to work on my dreams and despite some detours I got quite a passable average mark in my Abitur (A-levels). The greatest help was my first boyfriend who was to become my husband – also after some detours. I applied for my two dream jobs at the same time. The midwife schools declined my applications fast.

Since I didn’t want to wait for the answer of the universities, I started an apprenticeship as a landscape gardener where I wrote my very first novel (The Singing Mountains) in my lunch breaks. I still read it from time to time to remember how I should not write a novel. Nevertheless, it was a good experience to write something with more than ten pages and really finishing it. 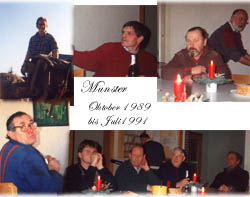 I was never sorry for the training and I remember it fondly. I often miss my colleagues but I know that I wouldn’t have had the strength for any longer period of so exhausting a work. Therefore, I studied science of forestry at the University of Göttingen. After the intermediate exam I registered at the University of Edinburgh for a year. When I returned, I was so fed up with learning that I finished my studies in a rush.

Surprisingly, I almost immediately got a job. For three years I helped to improve a forest-growth-simulation in Bayreuth. Since I was very lonesome in the evenings (my boyfriend lived about 500 km to the north) I finally started to write longer texts again. I studied many “Creative Writing” books. I don’t claim to be perfect now but I improved noticeably during this time. 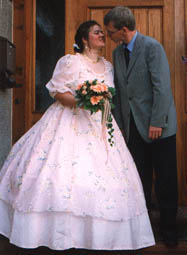 After four years in Bayreuth I returned to the North and moved in with my boyfriend (yes, still the same) where I wrote my thesis. Whenever my head buzzed with too many numbers and statistics, I wrote a bit of my historical novel, “Ann Angel’s Freedom”. I finished the first draft of my novel and got my doctorate degree approximately at the same time. I could have stayed in Bayreuth but the large distance to my boyfriend didn’t suit me and I decided against it.

My boyfriend and I got married on the hottest day of the year in 1997. I wore a self-made dress whose paper pattern I had bought on a journey to the USA ages ago. It was the only time in my life that people turned to me admiringly.

When our first daughter was born she changed our life radically. I worked less and wrote more. But I spent the most time with our child. I am sure that all parents of this world know what I talk about. We bought a little house which we are still renovating and redecorating. With now three children, life became rather turbulent but I never stopped writing again. Writing, next to my family, is the most important part of my life.